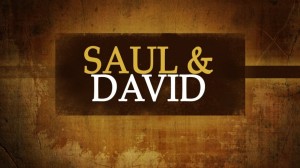 1 Samuel is an amazing picture of how Godliness affects leadership.  Take for example the contrast between King Saul and King David.

Now we know that David is not perfect.  He lied and deceived the priest when he was hungry.  As a result, David sinned, a mass of priests died, and an entire city was wiped out (1 Samuel 21-22).  But here is the difference between David and Saul.

Godliness isn’t required to be a good leader as evidenced from the many amazing leaders in our world, but if someone has faith in Jesus, their Godliness directly affects their leadership.  Humility, faith, and boldness will either bolster one’s leadership or the lack of those things will hinder it.

May we pray for humility, faith, and boldness today as we are called to some measure of leadership.  David shows us that we don’t have to be perfect; we just need to be greatly dependent on the grace of Jesus.

If you would like to learn more about Gospel Rich books, we offer a host of challenging and encouraging resources.  You can find them below: