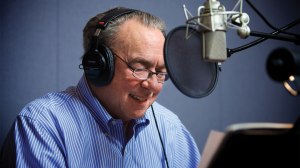 As some of you may or may not be aware, Dr. R.C. Sproul passed away this past week.  As a theologian, professor, author, and pastor, he was a spiritual mentor to millions of people.  The Gospel Rich Books release, “I am my father’s son”, tells a story about he was gracious to help mend a relationship between a father and son.  That excerpt is below.  Please read it in honor of God’s work done in Dr. Sproul’s life.

My father, who I affectionately called “Sam” and I rarely fought.  Even as a kid, I don’t remember any face to face screaming matches with him.  As adults, we were respectable, and we dealt with our few disagreements peaceably.

Except for one time.  I was probably thirty-five at the time.

We had a family member struggling with several large life issues.  Sam and I disagreed about how we should approach them.  I saw it as a Gospel issue, as in, “The Gospel teaches us to do this.”  Sam saw it as a law issue, “We need to teach this lesson.”

I don’t cast it that way to say I was right and Sam was wrong.  That was just the way we were approaching the situation, and looking back, I think we both had valid points.

But for the first time in our lives, we were barely speaking, and when we did, it was Mom saying, “Hey, don’t you want to speak to your father?”  She would then hand the phone to Sam and force us to talk.

Well, I was off at my denomination’s General Assembly.  This is when the teaching and ruling elders from across the country gather for worship, information, and some manner of business.  Within my denomination is a pastor named, RC Sproul.

As Sam was doing research to interact with me over areas of theological disagreement in seminary, he began to read Dr. Sproul.  Sproul made a huge impact on Sam, and in areas where I could not articulate certain theological positions well, Dr. Sproul could.  In fact, any changes of conviction on Sam’s part were much more due to Dr. Sproul than to me.

So, at General Assembly, I was walking around the vendor floor where a million books are sold.  Standing in the middle of the walkway was Dr. Sproul.  He was surrounded by about ten guys who were lapping up every word that he spoke.  I took my place among the circle and waited.  Eventually, the business of General Assembly renewed, and one by one, the sycophants (of which I was numbered) all left.

Dr. Sproul turned to me as I was the last man standing.  He has this amazingly gravel, smoke-tinged voice that helps give his wise words authoritative weight.  He realized that I had been standing for a long time and had said nothing. So, he asked, “Can I help you, young man?”

I told him that he could.  I told him that my father, Dr. Thom Duncan, was an avid reader of his books and greatly enjoyed his writings.  I then asked Dr. Sproul my favor.

“If I called my father, would you be willing to speak to him for a moment?  It would mean a lot.”

He agreed, and I immediately called Sam on my cell phone.  Surprised at my call, Sam asked if everything was okay.  I said, “Yeah, everything is fine, but there is someone here who would like to speak to you.”

I handed the phone to Dr. Sproul, and he said, “Dr. Duncan, my name is RC Sproul.  You must be really proud of your son here.”  They spoke for maybe five minutes, and Dr.  Sproul handed me back my phone.

When I returned to speak with Sam, he had an excitement in his voice similar to a kid who got to meet their favorite football player.  When I got home, we talked about the incident, and our tension was gone.  We brought up the conversation about interacting with the sick family member, but this time, all of the tension was gone.  We were able to speak in a way where care for the person was more important than winning the day.

That was the kind of man that Dr. Sproul was.  Gracious and giving.  Thanks, Dr. Sproul.

If you would like to read more from “I am my father’s son”, you can purchase this book at